Mary was an accomplished linguist, and could speak French, German, Dutch, Spanish and Swedish. She was able both to converse with, and write letters to, literary figures, and almost certainly had read widely. She is also said to have been able to sketch geological features and specimens. 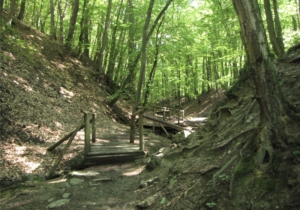 Steckeschääferklamm, a walking area near the Rhine (Image from wikimedia commons user: Traveler100)

TrowelBlazers was set up by an inspirational group of women to celebrate women archaeologists, palaeontologists and geologists who have been doing awesome work for far longer, and in far greater numbers, than most people realise.  In 2017 we were approached by Lyme Regis Fossil Festival to create a workshop and performance celebrating TrowelBlazers’ Raising Horizons Exhibition. This  tribute to them features only three of the many women whose work they celebrate – CHARLOTTE MURCHISON, Mary Lyell, MARIA OGILVIE GORDON – with others featured including Rosemary Strachan Hutton and Alicia Ann Spottiswoode (Lady John Scott).

Mary was one of six daughters of educational reformer and geologist, Leonard Horner (1785-1864). He was born in Edinburgh, where he also attended both school and university, subsequently moving to London. He hired tutors to ensure that all his children were well-educated as they were growing up. Mary continued to educate herself throughout her life, learning languages, and, at one stage, receiving instruction in conchology (shells) alongside her husband, Charles Lyell. 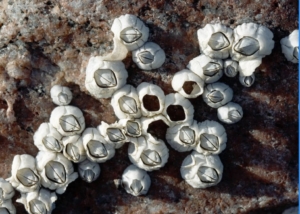 Barnacles. Once past the larval stage, they develop a shell, attach themselves to a surface, and thereafter cannot move
(Image from oceana.org)

Conchologist
Mary built up a collection of shells, and had a thorough knowledge of them, and was a specialist in mollusc shells.  She also collected barnacles which she sent to Charles Darwin

Geological Assistant
Charles Lyell had very poor eyesight, so Mary was the person he relied upon to help him source and catalogue specimens, write geological papers and prepare lectures

Scientific Traveller
Charles and Mary spent much of their married life at Charles’s family home at Kinnordy, near Kirriemuir, Scotland, but Mary also often accompanied her husband on his field trips. Her modes of travel included horseback, canoe, and stagecoach, as well as on foot in wild and undeveloped localities. She and Charles probably saw more of North America during their travels than almost any American living then would have seen 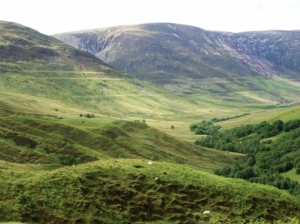 The ‘parallel roads’ of Glen Roy, Lochaber, Scotland, mentioned in a letter from Charles Darwin to Mary Lyell in 1847
(Image from scottishgeology.com (CC BY-NC))

Charles Lyell is said to have commented that a wife of a scientist is likely to merge her work with that of her husband and pass it off as his, and it is possible that these words described his own situation!  Certainly Mary Lyell’s work is almost all undocumented, though there exists an extensive collection of letters to and from her, mostly unpublished. A few of these letters are in the public domain, and these inform us that:

Other evidence of the attributes of Mary Lyell has to be from the words of other people, such as in the following tribute published after her death in the Boston Daily Advertiser:

“Her marriage with an eminent man of science gave a scientific turn to her thoughts and studies, and she became to her husband not merely the truest of friends and the most affectionate and sympathising of companions, but a very efficient helper.  She was frank, generous, and true; her moral instincts were high and pure; she was faithful and firm in friendship; she was fearless in the expression of opinion without being aggressive; and she had that force of character and quiet energy of temperament that gave her the power to do all that she had resolved to do.” 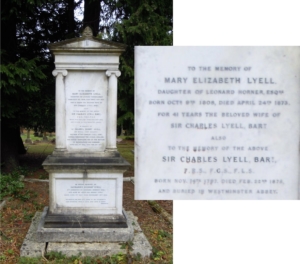 Despite the lack of evidence nowadays of her achievements, Mary Lyell was not entirely self-effacing. There are several instances where she stood up for better recognition for women, such as:

In 1871, the Council for the Society of Arts set up a Committee to promote the better education of girls of all classes. A central Committee would sit in London, with branches in as many areas of the country as possible. Mary Lyell was one of a number of women who volunteered to be on this Committee