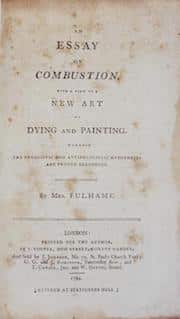 No record of artistic connections, although when she produced cloths of a gold or silver colour, she says that she ‘applied [this invention] to some maps, the rivers of which I represented in silver, and the cities in gold.’

Details of her education, are unknown. Her husband studied chemistry in Edinburgh under Professor Joseph Black (1728-1799), but she may have been self-taught. Her work shows her to be a skilled chemist.

Author of scientific work
Elizabeth Fulhame wrote a single book in 1794: An Essay on Combustion with a View to a New Art of Dying and Painting…, which received much attention and considerable praise. Her work was cited and admired by eminent chemists of her day, including Professor Thomas Thomson FRS FRSE. A French journal, Annales de chimie, contained a long and favourable review by a doctor and chemist in Geneva. When her work was republished in the USA, the editor called her ‘the very ingenious Mrs Fulhame’ describing her experiments as ‘numerous and well-conducted’. She had, he said, successfully opposed ‘the opinions of some of our fathers in science’. Like any scientific author today, she cites the work of others to show her familiarity with, and understanding of their work.

Practising chemist
Her book describes a large number of meticulously recorded experiments she conducted alone between 1780 and 1794 in her quest to make ‘cloths of gold, silver and other metals by chemical processes’. It is most unlikely that she had access to a laboratory in which to carry out these experiments; she was probably doing the research in her own home, as far as her finances would allow. Although people who took an interest in her work suggested that she should apply for patents, she believed that that would never be successful. She published her work in order to prevent its being plagiarised by others.

Analytical chemist
In her preface she explains that ‘I have endeavoured to arrange [the experiments] in such a manner, as mutually to illustrate each other, by contrasting the successful with those that failed, thus pointing out a general principle, which … connects all the experiments, shows their points of coincidence, and disagreement, and by this means furnishes us with data, by which, I hope, the art may be improved.’ In other words, she is ready to analyse her findings in order to produce hypotheses, allow others to do so too, and thus further knowledge of the science. 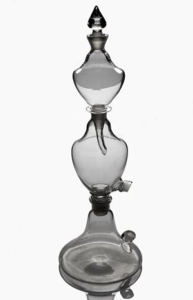 With the scientific knowledge we have today, we may dismiss as pseudoscience Elizabeth Fulhame’s aim to produce cloths of gold etc.. However Mrs Fulhame was following a well-established alchemical tradition, practised by well-known predecessors such as Robert Boyle (1627-1691) and Isaac Newton (1642-1727). Her experiments were perfectly valid explorations of the natural and material world.

Descriptions of her experiments are worthy of any modern laboratory notebook. She says exactly which materials and equipment she used, and shows she has read widely the works of scientists of her day, including Joseph Priestley (1733-1804) and Antoine-Laurent de Lavoisier (1743-1794). Mrs Fulhame is not afraid to disagree with some of these eminent men. Yet, like any modern scientist prepared to accept that her/his hypothesis may be wrong, she expresses herself willing ‘to relinquish [her proposition] as soon as a more rational appears’.

In the majority of her experiments she considered water was essential to promote the reaction. In some, she describes how water is ‘decomposed’ by another substance, yet at the end a ‘new quantity’ of water is formed, equal to that decomposed. Although the term had not been introduced by the late eighteenth century, this is the concept of catalysis, where a substance is needed for the reaction, but is not used up in the process. Therefore we can say that Mrs Fulhame was one of the earliest scientists to recognise catalysis.

Because she was trying to make cloths of gold or silver, she often began with small scraps of silk, which she would soak in a solution of metallic salts. She then treated the pieces in different ways – for example by placing them in a dark closet, drying them by the fire or exposing them to sunlight – and noted the results. Occasionally she was fortunate enough to find her cloth had beautiful colours, like red, purple or gold, or had ‘spangles’, sparkling areas. Historians often credit Mrs Fulhame’s descriptions of photochemical processes as forerunning the science behind early photography.

We know so little about Mrs Fulhame, that we cannot even be certain that her first name was Elizabeth! That name has been associated with her over the years, so we have followed the convention. She was certainly writing at a tumultuous time. In her preface dated 5 November 1794, she talks of the work of the French scientist, Antoine-Laurent de Lavoisier. In fact by that date, Lavoisier was dead, having been executed by guillotine in May 1794. He was of noble birth, and had a powerful position in the French regime at the time of the French Revolution. We can speculate on when this news might have reached Mrs Fulhame.

She was elected as a “Corresponding Member” of the Chemical Society of Philadelphia by 1798, following praise given by the Society for her work. Unlike the scientific societies in the UK, female members were accepted at that time. Philadelphia was a centre for learning and science, and the Chemical Society was particularly active, although it was disbanded around 1810. It was in Philadelphia that the American edition of her work was published.

Although the general belief of her day was that women were not qualified or intelligent enough to produce work equivalent to that of men, not everyone was of that view. In 1798, her contemporary, the American chemist and mineralogist, Thomas Peters Smith (1778/8-1802), said in A sketch of the revolutions of chemistry: ‘Hitherto we have beheld this science entirely in the hands of men; we are now about to behold women assert their just, though too long neglected claims, of being participators in the pleasures arising from a knowledge of chemistry. … Mrs Fulhame has now laid such bold claims to chemistry that we can no longer deny the sex the privilege of participating in this science also. What may we not expect from such an accession of talents? How swiftly will the horizon of knowledge recede before our united labours? And what unbounded pleasure may we not anticipate in treading the paths of science with such companions?’

Elizabeth Fulhame sharply expresses her views on how she may be regarded as a woman promoting these ideas: ‘Some are so ignorant that they grow sullen and silent, and are chilled with horror at the sight of any thing, that bears the semblance of learning, in whatever shape it may appear; and should the spectre appear in the shape of woman, the pangs, which they suffer, are truly dismal.’

Even in one short work, Elizabeth Fulhame showed she had a way with words. In today’s world, she would be able to hold her own in any debate!