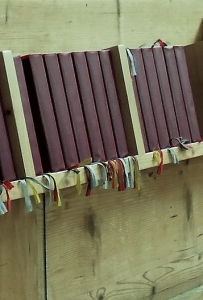 None that we know of, though lace-making required a good understanding of numbers and patterns – like much of science!

Eliza Westbury wrote this moving poem just after her mother died in January 1828, and only a few months before her own death. It reflects her love for her mother and her god while at the same time being an unexpected window on her personal and spiritual life, an insight unusual from a poor working women of that time. You can download a pdf of the words HERE.

This hymn, written by composer Maria Barthélemon, was discovered by Frances in the British Library and was due to be performed at the Brixworth Music Festival in May 2020. We believe it may not have been sung for 250 years. Originally the dedication was For the Benefit of the distress’d Weavers, but we have changed a couple of the words to point to the story of Eliza Westbury. Her story felt important to tell, despite not knowing if she had written any music for her hymns, as we were deep into research for impressive women in arts/science from Northamptonshire.

You can find a PDF of the text of The Lacemakers Prayer here.

Her education would have been at the Sabbath School in the Parish Church of St John the Baptist, Piddington where she had been christened, and she was said to have made “pleasing progress”. It is possible that she attended a lace school to learn her trade.

Lacemaker
Lacemaking arrived in Northamptonshire via French and Flemish immigrants in the 16th century. Eliza would have sat with the other women of the village outside in good weather working together and probably singing and chanting the local Tells – a form of poetry used to help them learn their skills.

Composer
She composed 150 hymns during the last 2 years of her life as a response to her conversion to evangelical Baptistry. Some of these appear in a book published just after her death (probably by local Baptist minister William Knowles) – ‘HYMNS by a Northamptonshire Village Female: to which is added, A Short Account of her Life’ – which contains about 70 hymns and poems.

Perhaps sharing her hymns with the women as they worked, singing them to local tunes or Tellings.

Her father William was probably a shoemaker, and it seems likely her mother, Elizabeth, would have been a lacemaker too.

It is likely she died as a result of an infectious disease which seems to have affected four of the five women in the house – a not unexpected event as you might surmise from her writing– her mother and aunt dying in January 1828 and herself and another aunt in April of that year.

For someone who would have had to work very hard and for long hours into the night, writing so much in such a short space of time was a truly remarkable achievement.

She is described as writing while she worked, with no mention of the extra labour of the physical writing or being able to find the means to furnish paper and ink which in themselves must have been considerable barriers. There is also the small matter of the assumption that women of that time who were poor were also illiterate – in fact, not only was she highly literate, but it is clear she overcame the constraints of time to read and study and form her own distinctive style.

She is a lesson to all of us who think we don’t have time to do things!!