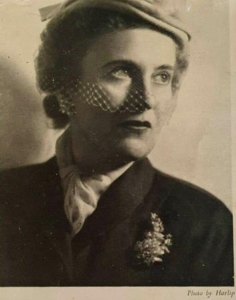 Photo of Doris Grant from the dust jacket of Dear Housewives, 1954

She was from a musical family – her father, a farmer, was also an amateur violinist who often judged local musical competitions. Doris’s husband and daughters played stringed instruments, which inspired her to take up the cello in adult life. She had artistic talents too – designing and making costume jewellery, and illustrating some of her own publications.

Title: No Need To Knead
Composer: FRANCES M LYNCH
Words: Compiled from Doris Grant quotes; an advert for flour in the Dundee Courier (Tues 27th Oct 1953) and a recipe for the Grant Loaf by Catherine Booth
Written: January 21st – 22nd 2021
For: String quartet, speaker and 2 female voices
Performed by: Frances M Lynch – voices; we were unable to record the strings so for now they are realized on a digital keyboard – we hope to update soon (Covid permitting)

Imagine the Grant family string quartet playing in their living room while the aroma of fresh bread fills the air as a Grant Loaf gently bakes in the oven. The voices, in Doris’s head, are going over the ingredients  – yeast, salt, flour, honey and water – and ruminating on the “chemical dragons” of chalk, pesticides and agene  – beware the “murdered bread” (white bread!). 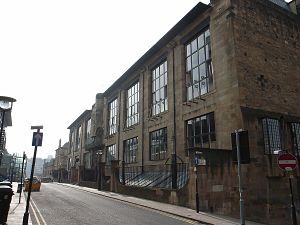 School at Banff Academy; 5 year Diploma at Glasgow School of Art, for which she was nominated as top student of her year.

Healthy eating advocate
As a young woman, Doris Grant suffered from chronic ill health caused by rheumatoid arthritis. A cousin, who was a doctor, suggested she look to her diet. She discovered the ‘Hay Diet’, developed in the 1920s by an American physician, Dr William Howard Hay. The main principle of the diet stipulated that you should avoid combinations of certain types of food, and eat different food groups at different times. Adoption of this diet improved her health enormously. The experience prompted her to examine nutrition and its effects on health. She became a strong advocate of natural and whole foods, fresh and unprocessed, and little or no sugar. Conviction that this was the healthiest way to live became a lifelong passion, strengthened by her own research and anecdotal evidence from others.

Author
In 1936-1937, Doris Grant wrote a regular column in the Sunday Graphic, where she published her ideas on healthy eating, including experiences from correspondents.  Having met Dr Hay, she wrote her first book, The Hay System Menu Book, published in 1937, which laid out the principles of the diet, along with recipes aimed at a British audience. Several other books on healthy eating followed, often produced in multiple editions over several years, such as: Feeding the Family in Wartime (1942); Your Daily Bread (1944); Housewives beware (1958) and, with co-author, Jean Joice: Food Combining for Health (1984), which became a classic, selling over a million copies worldwide. 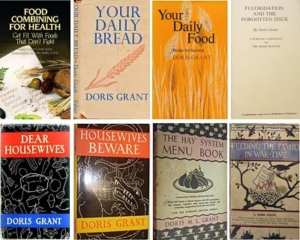 Baker and cook
Doris Grant’s books made her very well-known, and called on her to be a frequent speaker at meetings. She was also an experienced home baker and cook. Today she is best remembered for one of her recipes, the ‘Grant Loaf’ – bread made with stoneground wholemeal flour and no white sugar, which, crucially, did not need to be kneaded, and required only one rising. This, she said, made it quicker and easier to make at home. The recipe was much quoted, and reprinted many times in magazines and newspapers. 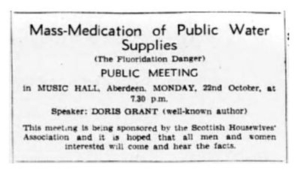 Advert for a Public Meeting on Fluoridation at which Doris Grant was speaking (Credit: As printed in: Aberdeen Evening Express Friday 19 October 1962, p.11)

Anti-fluoridation campaigner
Her antipathy for chemicals in foodstuffs extended to fluoride, and to the debate about whether its addition to public water supplies would improve dental health, especially in children. She frequently addressed meetings throughout the country on the subject, and lobbied government too. In 1980, a pamphlet she wrote to the Prime Minister, Fluoridation and the Forgotten Issue, was presented free to all Members of Parliament. In 1985, she supplied her arguments against fluoridation to Sir Ivan Lawrence MP, which was followed by one of the longest ever debates in Parliament – 20 hours 56 minutes. At the age of 95, she was one of the Vice Presidents of the Scottish Pure Water Association, and signed a petition to the Scottish Parliament against the fluoridation of public water supplies in Scotland.

Illustrator
Several of her books included her own illustrations. She also designed the book jackets for some of her books, including: Dear Housewives, published by Faber & Faber in 1954.

Jewellery designer
The costume jewellery she designed and made during WW2 was sold in the boutique of fashion designer and royal dressmaker, Norman Hartnell. 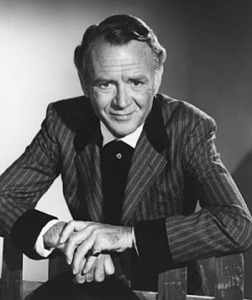 The recipe which Doris Grant devised, the ‘Grant Loaf’, made with wholemeal flour and other natural ingredients and requiring no kneading, is frequently reprinted in recipes today, albeit usually slightly adapted. Several well-known cooks and bakers including Delia Smith have produced their own versions using Doris Grant’s principles.

The medical establishment in her day were split on whether they could accept her views or not, and she was often thought to be a crank. She seemed not to care about that; the description did not deter her from continuing to publicise her views in newspapers and magazines, in her own publications, and at public meetings. Nowadays, few would disagree with her basic principles. She herself lived, with apparent good health, until the age of 98, so set a good example! 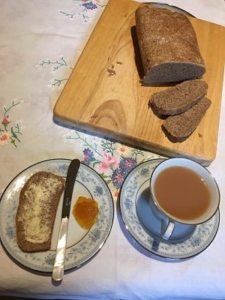 A ‘Grant Loaf’, as baked on Monday 18 January 2021. Verdict of taster: “It’s nice, and not heavy at all!”. You can make this recipe too – Click here for an adapted modern recipe for a ‘Grant Loaf’ by Catherine Booth!

The Hay Diet which she promoted may not be suitable for everyone, but it is still a diet which many people believe in. Her work brought it to early public notice.

Doris Grant was such a vehement opponent of fluoridation, that she was prepared to express her views at the highest levels – and she made herself heard too.

Throughout her life, she seemed always ready to learn new skills – another example to all of us.

The fact that Doris Grant’s recipes and writing became so well-known and popular meant that her ideas reached a wide public. She seems to have been a very convincing speaker, invited to speak to audiences large and small all around the country. So, without any formal qualifications but with plenty of experience, she was undoubtedly a powerful influence in food lobbies over the second half of the 20th century.

Click on links for more about Doris Grant’s interests.

Hay System of Food Combining Summary
Let Food Be Your Medicine (1958)
Food in Wartime
House of Commons Debate on Fluoridation of Water, 1985
Allergies and the Missing Link
Scroll to top