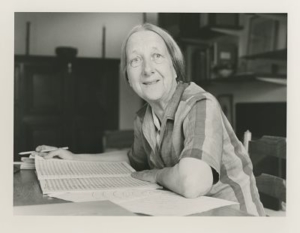 Holst was a keen ethnomusicologist. She was passionate about the preservation and spread of our folksong and dance heritage and arranged many traditional folk tunes for amateurs and professionals to play and sing. She was a key member of the English Folk Dance and Song Society. Her life-long fascination for folk music was not however confined to English traditions. Typical of her wide interests was the two months she spent, in 1950-51, at Santiniketan University in West Bengal studying Indian music.

This is one of the “Four Canons for Winsome” Holst wrote while she was teaching at Dartington Summer School that year. They were dedicated to a fellow teacher Winsome Bartlett, one of Holst’s closest friends, who was teaching craft skills and folk dancing to the music students.

This song was one of many collected by Cecil J. Sharp, founder of the English Folk Dance Society. In 1924 Imogen had filled the house in Town Street, Thaxted with country dance tune books, in arrangements by Cecil Sharp. This gave her father the idea for his opera At the Boar’s Head.

“A sweet country life is most pleasant and charming,
All for to walk abroad on a fine summer’s morning,
Bright Pheobus did ashine and the hills was adorning
As Molly she sat a-milking on a fair summer’s morning.
No fiddle nor flute nor hautboy nor spinet
Is not to be compared to the lark nor the linnet.
Down as I did lie all among those green rushes,
‘Twas then I did hear the charms of the blackbirds and thrushes.”

electric voice theatre · May Day Carol: The Hedges And Fields by Imogen Holst

This evocative arrangement, a fusion of Pagan and Christian rites, echoes the life of Mycologist Gulielma Lister, particularly as a young girl, spending days with her family out of doors, collecting, sketching and observing the flora and fauna around Lyme Regis.

The hedges and fields are cloth’d in green
As green as the early leaf
Our Heav’nly Father waters them
With his morning dew so sweet.

Now we’ve been rambling all the night
And some part of the day
And as we’re returning back again
We’ve brought you a bunch of May.

A bunch of May we’ve brought you here
And at your door it shall stand
It is but a sprout, but it’s well budded out
By the works of our dear Lord’s hand.

My song it is sung, and we must be gone
No longer can we stay
God bless you all both great and small,
And we wish you a joyful May.

This is one of two Four-part Rounds for equal voices written after Holst had left St Paul’s Girls’ School before she started studying at the Royal College of Music.

We are grateful to the Holst Foundation for their permission to record these works and to Britten Pears Arts for providing the unpublished scores. 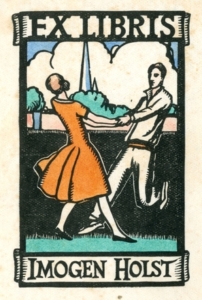 At the age of five Holst went to the Froebel Institute in Hammersmith, London, whilst summers were spent at the Holst’s country cottage near Thaxted, Essex.

She wrote her first compositions whilst boarding at Eothen School for Girls in Caterham from 1917 to 1920. Her teacher there was composer Jane Joseph who in turn had been a pupil of her father, Gustav Holst. She nurtured Imogen’s early composing but died tragically young so would not have seen her fulfil her full potential.

Imogen then attended St Paul’s Girls’ School, Hammersmith where her father was director of music. Here she won the junior and senior Alice Lupton piano prizes and founded a Folk Dance Society.

1922 saw an important, if informal, addition to her education – she discovered folk dancing! There was country dancing on the vicarage lawn in Thaxted three evenings a week in August. This was the beginning her lifelong interest in folk dancing.

She entered the Royal College of Music in 1926 studying piano, composition and conducting. She increasingly focused on composition winning the Cobbett Prize for her Phantasy Quartet.

Throughout her life Holst used her talents as composer, arranger, conductor, public speaker, teacher, writer and organiser to earn a living and to inspire enthusiasm for music in others. For instance; 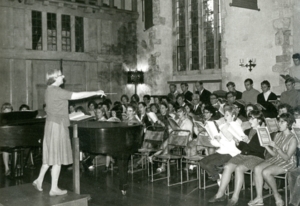 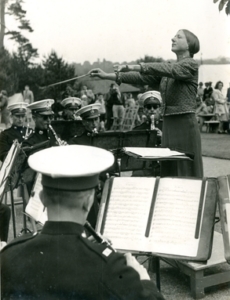 In 1933 Imogen took part in a Gustav Holst Concert held in Carlisle which featured first performances of new works by both father and daughter. Imogen conducted her composition, a suite for brass band entitled The Unfortunate Traveller, herself. This was the first time an original brass band work by a woman composer had been publicly performed and also the first time a woman had conducted a brass band at a public concert. Imogen was a pioneer breaking down cultural and social barriers. 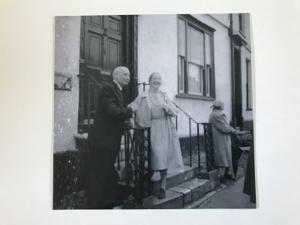 Imogen Holst with Sir Adrian Boult at the Town House in Thaxted for the unveiling of a plaque to her father Gustav on her birthday in 1963 (Image by Thaxted resident John Bull, provided by Thaxted Festival via Michael Goatcher)

Holst was influential in the development of music education and community music-making in England in the twentieth century. She spent her life and career dedicated to the task of encouraging amateur music-making, energetically and generously writing for and working with amateur singers and players. Holst was a pioneer, composing throughout her career for instruments such as brass band, pipes, recorders and hand bells, bringing these instruments into the art music or cultivated music worlds. She was one of the first women to establish herself as a conductor. 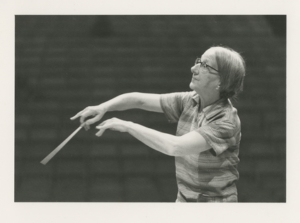