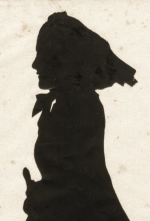 An actual photograph of Elizabeth Gray has not yet been supplied by the Natural History Museum, but can be viewed here

No record of her own artistic connections, but various census returns list two of her daughters as artists, and another as a music teacher

TrowelBlazers was set up by an inspirational group of women to celebrate women archaeologists, palaeontologists and geologists who have been doing awesome work for far longer, and in far greater numbers, than most people realise.  In 2017 we were approached by Lyme Regis Fossil Festival to create a workshop and performance celebrating TrowelBlazers’ Raising Horizons Exhibition. This tribute to them features only three of the many women whose work they celebrate –  CHARLOTTE MURCHISON, MARY LYELL, MARIA OGILVIE GORDON – with others featured including Rosemary Strachan Hutton and Alicia Ann Spottiswoode (Lady John Scott). 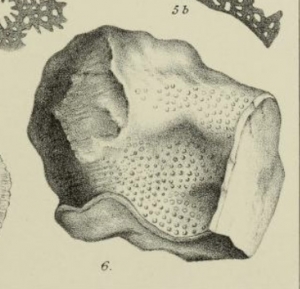 A kind of fossil coral collected by Elizabeth Gray. From: Nicholson, H. A. and Etheridge, R. A monograph of the Silurian fossils of the Girvan District in Ayrshire with special reference to those contained in the “Gray collection”. Vol. 1, part 3 1878-1880. Described on p.261 and depicted on plate 16. (image from biodiversitylibrary.org)

School in Girvan, Ayrshire, and boarding school in Glasgow; Geology class for one year at University of Glasgow run by John Young, Professor of Natural History. He was particularly passionate about education for women 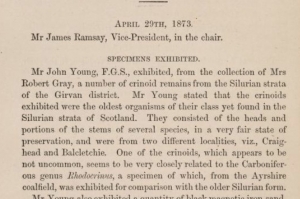 Fossil Discoverer, Collector and Enthusiast
Worked at fossil hunting and collecting in regular visits to the Girvan area for nearly 70 years. Her collecting began as a fascinating hobby, encouraged by her father, Thomas Anderson, who became a farmer in the area when Elizabeth was very young. He was an amateur naturalist, and often picked up fossils while he was working on the land.

Her own curiosity led her to acquire significant knowledge of fossils – and she was able to discriminate between different species, recognising when she had found something new and unique. Although she was offered the opportunity to advance her knowledge of palaeontology so that she could interpret her own fossils, she preferred to have the most eminent specialists in the field do this work.

Perhaps she was modest about her own talents – or maybe she enjoyed collecting more than researching individual specimens. She was proud that her unpaid work was contributing to scientific advances, but also constantly asserted her ownership of the material, demanding the return of specimens if she felt any individual scientist had held on to them for too long. 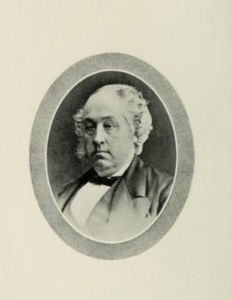 Photograph of Robert Gray by J G Tunny, reproduced in the Glasgow Naturalist Vol. 4, no. 3 (May 1912) plate 5 (image from biodiversitylibrary.org)

The estimated extent of the Gray Collection numbers over 40,000 specimens, collected over about 80 years. In the early years, some were collected by her husband, but the vast majority were collected by either Elizabeth Gray or her daughters.

Wife of banker who was amateur ornithologist
Elizabeth met her husband, Robert Gray (1825-1887), who worked in the City of Glasgow Bank, when he visited the area to pursue his interest in ornithology. The two began to work together on bird and fossil excursions. Robert was a member of various natural history societies, and became a Fellow of the Royal Society of Edinburgh. He produced articles based on their joint work under his own name – women at that time would not have presented their own papers. He displayed specimens she had collected to fellow members of the Glasgow Natural History Society, of which he was a founder member. After he died Elizabeth continued with her fossil collecting and recording until she was in her 90s. 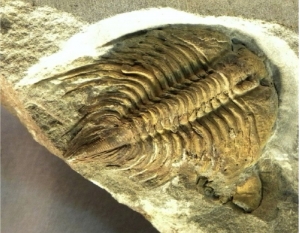 A trilobite fossil from the Girvan area. Elizabeth Gray found many similar fossils to this (image from fossilmail.com)

The area around Girvan was particularly rich in fossilised remains from both the Ordovician and the Silurian periods. The Ordovician lasted from around 488 to 443 million years ago, when the northern hemisphere largely consisted of ocean, with a huge variety of marine life. The end of that period was marked by freezing conditions causing mass extinctions.  Following the Ordovician was the Silurian, from around 443 to 416 million years ago, when temperatures increased again and rising sea levels resulted in shallow marine environments. Oceans became heavily populated by plankton, and plants and animals began to emerge on land.

Evidence of life on Earth during these eras was revealed in the fossils which Elizabeth and her family found. Examples of these fossils include many of the following: Trilobites, Brachiopods, Graptolites, Corals, Conulariida and Echinoderms (such as starfish and sea urchins, and the now extinct and oddly-shaped Cothurnocystis).

Elizabeth Gray was much more than an amateur fossil collector. She was described by later palaeontologists as one of the foremost fossil collectors of all time. She used scientific method in her work by: 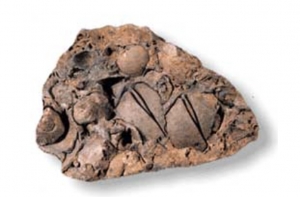 Fossil Brachiopods. These were particularly abundant during the Palaeozoic Era (248 to 545 million years ago), and are often the most common fossils in rock of that age.
Brachiopods were among the first of the fossil species collected by Elizabeth Gray. (image from 3d-fossils.ac.uk)

Recognising the future importance of her fossil collections, and being determined to have them housed in the most reputable museums. Indeed scientists of her day and ever since have found her fossils to be a wonderful resource for exploring and expanding knowledge of palaeontology in Scotland 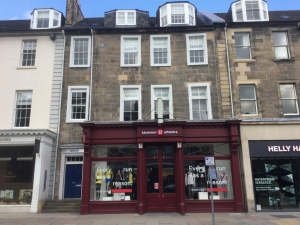 Elizabeth was rarely in her day known under her own name. In the literature, she is always called Mrs Robert Gray – yet she survived her husband by 37 years.

Although she recorded the exact locality in which they were found, she never numbered her specimens – but had a phenomenal memory, and remembered each of them individually. The lack of a catalogue or numbering system meant palaeontologists sometimes found it difficult to determine to which specimen she was referring, yet she always knew! She and her daughters had pet names for some of the fossils – like the ‘hat and feather’ or the ‘boot’.

Over the years she sold parts of her collection to different Museums, but even after her death, a large collection remained in her home at 59 George St, Edinburgh, where they were housed in tall cabinets round the walls of her study. These eventually were also passed to Museums, the majority going to the British Museum (Natural History), now the Natural History Museum. 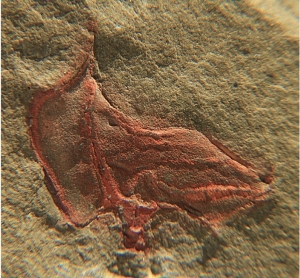 Cothurnocystis elizae – the type of fossil Elizabeth and her daughters nicknamed the ‘Boot’ (Image source: Dwergenpaartje on Wikimedia commons)

She was frequently extremely impatient – she could not understand why a palaeontologist who had borrowed her specimens needed to take so long to research them – even though many of them were having to carry out their own jobs at the same time!  One of these was Dr F A Bather (1863-1934), Keeper of Geology at the British Museum (Natural History), author of a large number of papers, promoter of geology to the public, journal editor, also heavily involved in museum administration. She frequently berated him for not progressing faster with research into her specimens, saying that he had to realise she was becoming elderly and had little time left!

An anecdote from the time of WW1 is quoted by R. J. Cleevely, the author of a very comprehensive biography of Elizabeth Gray. It comes from a letter by her daughter, Alice Gray, in 1938, where she remembers:

“During a Zeppelin raid on Edinburgh … we spent most of the night in a bank on the opposite side of George St. – as being a much stronger building than the house we live in, which is one of the original houses and dates from 1790 – My mother put into a large handbag as many of her very best Cystids as it would hold and sat with it on her lap for 3 to 4 hours until the danger was past. She had some anxious moments during the War.”

Elizabeth Gray inspired firstly her daughters to work with her for many years, then to continue the work themselves after she had died. Her daughter, Agnes, was said to have been a trusted worker by the time she was 6 years old.

She corresponded with many of the palaeontologists of her day, allowing them to borrow her fossils in order to write about them. A few of them were women – such as Jane Longstaff (née Donald) (1855-1935), and Ida Slater (1881-1969). She is still inspiring today’s palaeontologists who can find her specimens invaluable in their current research.

She showed she had business acumen and recognised the monetary value of her collections. She knew they would be valued by museums, and she negotiated a price for a number of specimens with different museums. She was not happy to be offered less than she thought they were worth, and wrote to tell curators this! As well as the Natural History Museum, the Hunterian Museum, Glasgow, and the National Museums of Scotland, Edinburgh, hold specimens collected by her. 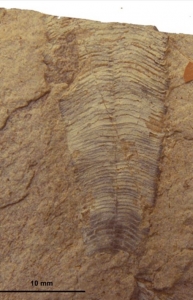 An example of a Conulariid. Elizabeth Gray was the first to find a specimen of this type of fossil in the Girvan locality (click here for image source) 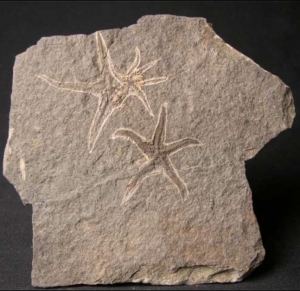 Urasterella sp. & Saltaster sp. (Multi Starfish).
Elizabeth Gray found many starfish fossils near Girvan – possibly close to the area where this one was found (click here for image source)

Example of fossil graptolites – colonies of animals which lived about 520 to 350 million years ago, evidence for which looks like pencil markings on rocks. (click here for image source)