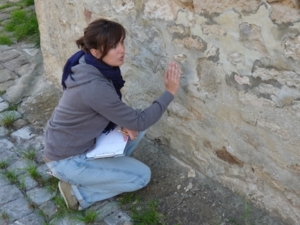 When one of my colleagues told me about a musical project to transform scientific data into sounds, I said to myself “I want to be a part of this adventure”. I love music. My hometown in Reims has always been home to many festivals and creators of electronic music.

The children visited us at the Engine Shed to learn about the history of the building and the conservation science which now takes place within its walls. The composers started with how it was built, what kind of things it was used for, how it decayed and how Historic Environment Scotland brought it back to life.

Raploch Primary – where I gave a talk –  concentrated on the building of the Engine Shed, beginning with a treasure hunt round the building to identify the stone, timber, bricks and other materials used. They found symbols of tools on the glass of the building and imagined what they might sound like, and finally what kind of things happened in the building once it was ready – like trains moving goods around, soldiers marching and engines being repaired before  it was abandoned and later restored.

Frances M Lynch also wrote a piece entitled “Salt Tears” based on the same story and techniques. For more information go to the MAUREEN YOUNG page.

During my childhood, my parents would take us to visit places all over France and each summer we would return to Briançon in the Alps where I first fell in love with the colour and forms of Earth: geology. On top of this I have always been impressed by ruins, historical monuments, and towns. And voila: a little archaeology.

I used to work for a café where I prepared muffins and sandwiches. I also worked in a bank for a few months during my studies.

My proudest scientific achievement is being in Scotland and working for Historic Environment Scotland where I share and enrich my ideas on the approach to the conservation of materials and monuments. 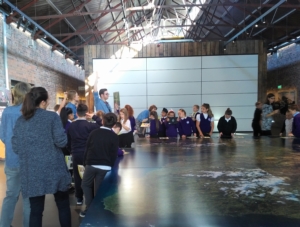 Sarah Hamilton and Aurelie look on as the Outreach Team show the children of Raploch Primary how the giant mobile map works!

Hypatia of Alexandria was a Professor of Physics and Astronomy at the school of Neo-Platonism and she was the creator of the hydrometer.